How To Add Existing User To A Group In Ubuntu? – POFTUT Skip to content 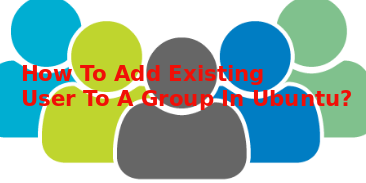 Ubuntu is a popular distributions used by a lot of companies as Desktop  and Server. As a system administrator one of the most recurring job is changing existing user group. In this tutorial we will look how to accomplish this task and some helper commands about this.

Primary group specifies the user first group which will be used in file creation and other operations. For example if a user creates a file the group of the file will be set to the user primary group.

Secondary group is generally used for permission related operations. For example if we want to a user to access network sniffing device or features we need to add required group to the user.

Before doing any add or remove operation we generally prefer listing given user primary and secondary groups.  Group information is stored in file /etc/group and we will filter it with user name ismail like below.

There is id command which can be used to print user related information. This will list userid, group id (guid) and secondary groups of the user.

Add User To The Secondary Group

We can change this group with usermod command by using  -a option.  In this example we will add primary group of user ismail into root group.