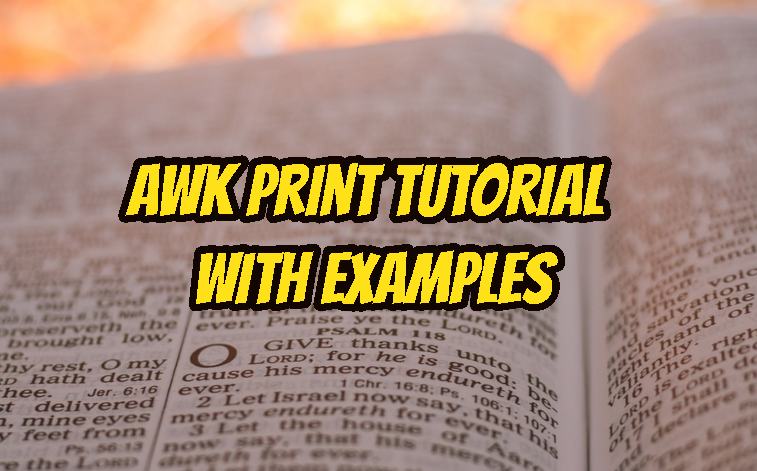 Awk is a stream type programming language. Awk can edit given text ant provided new text according to instructions. We will look popular usages of Awk in this  tutorial. There are alternative awk implementations like below

Awk is line oriented so by default provided text is processed line by line. Awk is generally used to search a pattern and make actions against it. We can call this pattern-action language

Awk have logic how to process provided text.  Awk will follow the steps below.

We will use following text file named fruits in this tutorial.

We will make an example about how Awk works. In the following example Awk simply read lines from file fruits.txt and write to the standard output. We can see here the logic of Awk a bit.

Awk usage is not printing files line by line. To create complex usage scenarios there should be some match function. Match is implemented with / like below by providing text file.

As we know some text will be column based. We can only print specified columns. by using Awk variables.

As stated previously in the workflow of the Awk there are BEGIN and END steps those executed accordingly. We can print beginning and end statements.

Another useful feature is  using comparison filters to select only matched lines according to the provided values and operators. We want to get fruits those is bigger than 5. Here is how can we achieve this.

While filtering rows the match can be specified for specific column. Following example will look column 1 for ban text. We can search for a specific term to specified column.

Print The Number Of Lines

We can count lines numbers by using variables. We will look names that contain “i” and count them.

Up to now we have get Awk program directly. But Awk utility provides the ability to read from file with parameter -f .

Standard text expression is powerful for most of the operations. But sometimes this will not enough. There is support for glob and regex expressions. Awk by default provides glob search. But providing regex search is possible too

We can provide the column which will be not printed.

Sometimes Awk version is important it can be printed like below.