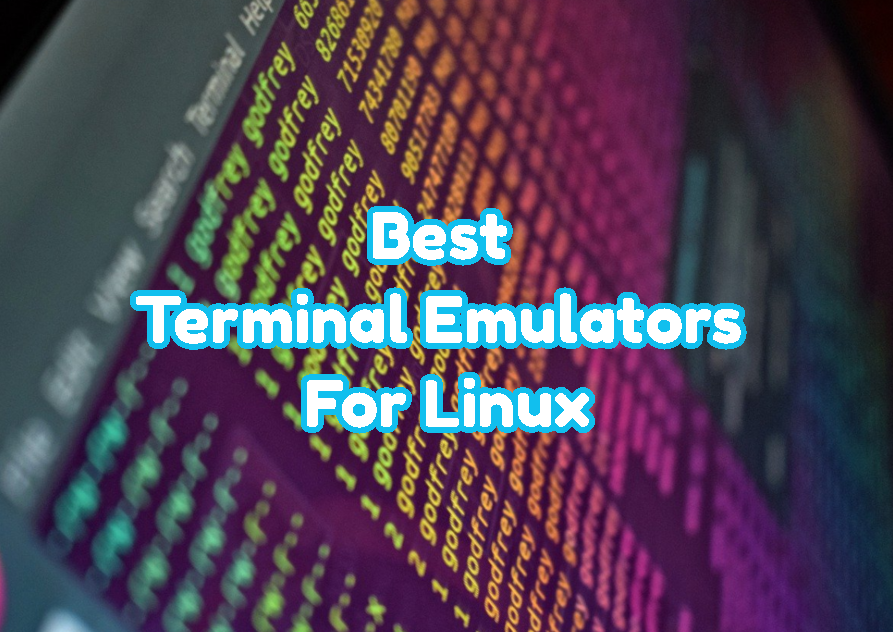 Terminator is created by Chris Jones.  Terminator is inspired by Gnome Terminal. The ultimate and most useful feature of the terminator is splitting tabs into horizontal and vertical parts. This feature gives the ability to work multiple panes in a single tab/window. Grid layouts can be saved as a profile and can be used in the future.

Tilda is a different type of Linux terminal which behaves differently from main terminals. Tilda is a simplistic terminal. Tilda can be run in a little area of the desktop and can be moved up-down, right to left with keyboard shortcuts. Tilda has an auto-hide feature where it will be hidden if mouse focus is lost. As we see Tilda is a strange but very useful Terminal Emulator in some situations.

Guake is a drop-down Linux terminal provided by the GNOME desktop environment. Guake is an alternative for KDE drop-down terminal Yakuake. Guake generally started at login and can be accessed with F2. This makes terminal usage very fast and funny. Guake terminal size can be set according to needs. For example, it can be used only on the upper half of the desktop.

Like Guake Yakuake is a drop-down terminal and provided by KDE or Plasma desktop environment. Yakuake has more features than counterpart Guake. Yakuake gives the ability to sort tabs with keyboard shortcuts. Yakuake can be accessed with F2 from all desktops as a single instance. Yakuake also supports multi-tab.

ROXTerm is developed as an alternative to the Gnome Terminal. The aim of the ROXTerm project is to provide a smaller footprint and faster start-up time. So ROXTerm uses different libraries than Gnome Terminal. ROXTerm provides most of the featured of Gnome Terminal and some extra features for power users.

ETerm is one of the lightest Linux terminal emulators in Linux world. It is designed for freedom of choice philosophy and gives the ability to customize its features. ETerm has support for Linux, Solaris, HP-UX, AIX, FreeBSD.

Rxvt is a slimmed down alternative to the xterm. It has some interesting features like Tektronix 4014 emulation and toolkit-style configuration.

Termite is a simple RS232 terminal. Termite provides messenger like interface for usage. It can be used with COM ports. It supports plugin interface, non-standard baud rate, data forward between RS232.

WTerm is a color V102 Linux terminal emulator developed for X Window System. It can use a background image and set for transparency. It has support for Latin, Chinese, Greek, and Kanji character sets.

LXTerminal is an official terminal provided by the LXDE desktop environment as a Linux terminal. LXDE is a lightweight and fast terminal with average features.

Konsole is a powerful terminal emulator provided y KDE or Plasma desktop environment. Konsole supports multiple profiles to use and save. Different encoding schemes like UTF-8, ASCII, etc. It has also an interesting feature named Bookmark where the current path can be saved.

TermKit is an interesting terminal emulator. It is developed with WebKit and Node.js but runs as a desktop application. TermKit is supported in Mac, Windows, and Linux. It is currently not maintained.

St stands for the simple terminal. St is an old type and an ugly terminal according to its home page. It implements old and unneeded terminals but has also UTF8 and serial line support.

Terminology is the official terminal of the Enlightenment desktop environment. It has interesting features as a terminal emulator. Terminology understands URL links and email addresses also play video.

Xfce terminal is the official terminal emulator of the Xfce4 desktop environment. Xfce Terminal has support for coloring, multiple tabs and drop-down feature similar to yakuake.

Xterm is a terminal emulator very lightweight. It has color mode and support for different character sets. It has also VT220 emulator support.

Likyterm is a terminal emulator based on libvte with the aim of being fast and lightweight. It supports terminal coloring and multiple tabs. Also different encoding like UTF-8, ASCII are supported. Hyperlink support is another feature of Lilyterm

Sakura is a terminal-based GTK and VTE. It has little dependencies so there is no need to install a Gnome desktop environment. Sakura uses several terminals in one window and a contextual menu.