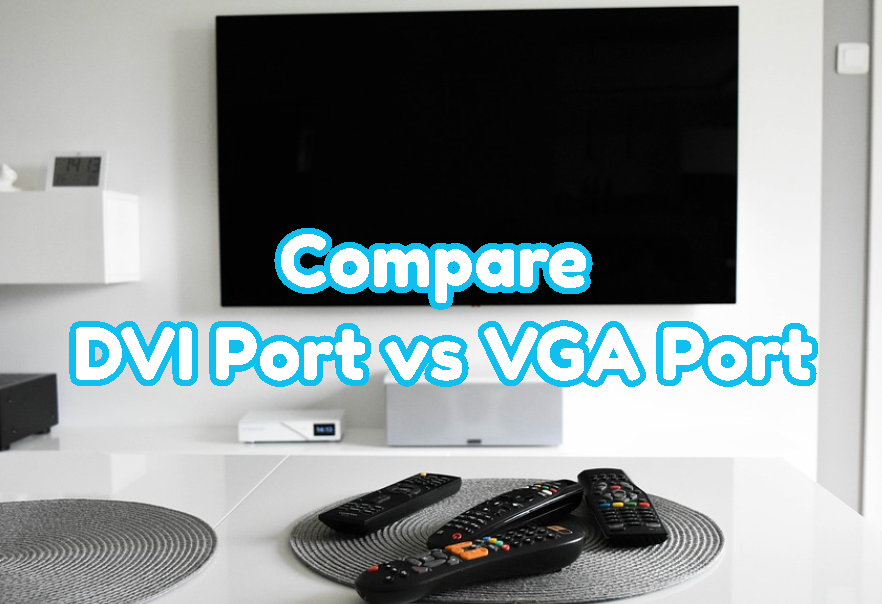 VGA and DVI are two popular connector types used to connect computers, laptops, media boxes to the monitors and screens. Even VGA and DVI are from different categories they are generally compared with each other.

DVI or Digital Visual Interface port is created to provide cleaner, faster, and more precise display which is better than previous display ports. DVI is created by the Digital Display Working Group in 1999. Even DVI is newer then VGA it is superseded by the port types like DisplayPort and HDMI.

VGA or Video Graphics Array port is created in 1987 by IBM. It is superseded by the DVI. VGA is very popular amongst the digital world where it is used the default display port type for long years before the HDMI.

VGA has 15 pins where they are used to transmit analog RGB signals with some vertical and horizontal sync signals. RGB is the short form for the Red, Green, Blue. VGA has only male and female forms where the male type is connected to the female type.

DVI is more advanced in terms of the form where it has 29 pins which can transmit both analog or digital signals. DVI has different versions about its form like DVI-I, DVI-D, DVI-A micro DVI etc but in general, the following form type is used. DVI form is much wider than the VGA because of the pin count and its layout.

There is no guarantee but  VGA port can support resolutions up to 2048×1536 px at 85 Hz. this is a very good resolution for most cases.

DVI can support resolutions up to 2560×1600 px at the 60 Hz. DVI provides more quality and reliable resolutions according to the VGA.

DVI uses digital signaling which is different from VGA. Resolutions like 1920×100 pixels which is Full HD can be transmitted in 60 Hz. A lot of pin and transmission channels make the DVI capable of transmitting a lot more data with higher resolutions.

Bitrate is the count of bits which can be transferred in a second. As VGA is not digital we can not provide the exact bit rate of the VGA but we can calculate from the screen resolutions, color depth, etc. Simply we can say that a Full HD, 24-bit color transmission with the VGA will have around 3 Gbps bitrate or transfer rate.

DVI signaling is in digital where we can expect to calculate more precise bit rates. DVI single link connection can transmit about 3.96 Gbps where dual link can transmit 7.92 Gbps. Keep in mint that DVI also transfers the audio signals where VGA not.

Both DVI and VGA have different types of converters. This means we can convert a VGA port into HDMI, DVI or a different type on the other side DVI can be converted into VGA, HDMI, etc. There is a topic where VGA does not transmit audio signals the signals will not convert vice versa.

The maximum cable length or range is related to the signal and the resolutions. There is no standard specification about the range but in general use, VGA can transmit 10280×1024 resolution about 15 meters where similar resolution with the DVI can be transmitted the same length which is 15 meters. As both VGA and DVI are designed to screen connection, not a computer network we do not request more than these lengths. But alternatively, different types of VGA and DVI extenders can be used to extend the range.

VGA was the standard way to connect devices to the screens and displays for a long time. But in recent years it losing its popularity and display ports like HDMI and DVI takes its place.

DVI is the successor of the VGA where is used in different devices. Especially workstations and some desktop systems provide the DVI port. But HDMI is more preferable alternative to the DVI.