How To Download and Install Nmap For Windows Operating Systems? – POFTUT

How To Download and Install Nmap For Windows Operating Systems?

As stated previously nmap  is provided by most of the Linux distributions via repositories. In Windows, we should download the installer executable file. We can download executable from following links. As of writing, this tutorial nmap latest version was 7.60

We can install nmap  with Windows style Next->Next like below. 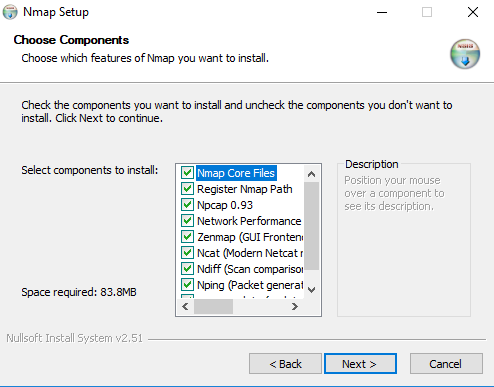 We can use installed nmap via command line. We should navigate to the nmap directory. Then we will issue nmap command like below. In this example, nmap is located at the C:\net\nmap\  path.

In some cases, we may do not have any privileges to install applications in the current operating system. So we need to use nmap  without installing it. We can download the following zip file where 32-bit nmap can be used. We should extract before using it.

LEARN MORE  How To Discover Network Hosts With Nmap?