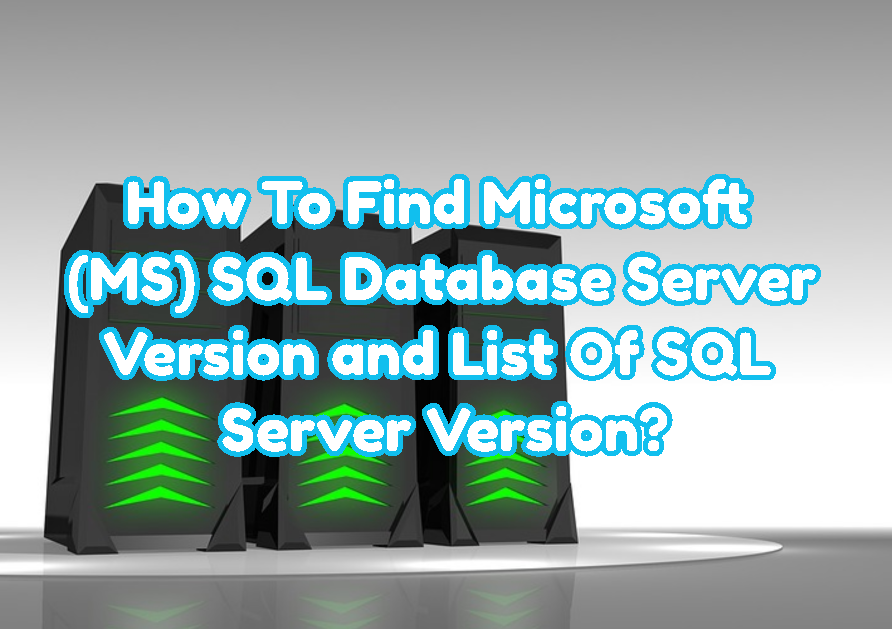 MS SQL is one of the most popular SQL databases. It is created in 1988 for the OS/2. During time SQL Server has a lot of versions which has different versions. In this tutorial, we will learn how to get the MS SQL Server Database version in different ways like GUI, SQL Prompt, Error Logs, Command-Line, etc. We will also provide the MS SQL Server versions from the start.

How To Find MS SQL Server Version From GUI

MS SQL server is generally managed with the Microsoft SQL Server Management Studio simply MSSMS tool which provides GUI features. We can use this MSSMS GUI tool in order to get the connected MS SQL Server database version. After connecting data from the Object Explorer right-click to the Database Server which will open a menu. From this menu click to the Properties which will open a  Server Properties window.

How To Find MS SQL Ser Version From SQL Prompt

MS SQL Server provides some special queries in order to provide metadata information about the database server. This language is called T-SQL where we can run MS SQL Database Server related special SQL queries. We can use @@VERSION keyword with the Select Query. As we can see @@version, @@VERsion are all of them are the same which means they are case insensitive.

We can see the following information is available from the query result.

How To Find MS SQL Ser Version From sqlservr.exe

The SQL Server Daemon executable file is named as sqlservr.exe and stored in the C:\Program Files\Microsoft SQL Server\MSSQL15.MSSQLSERVER\MSSQL\Binn path. This executable can also provide information about the MS SQL DAtabase Server version. This path can be different according to the operating system architecture like 32 and 64 bit.

How To Find MS SQL Server Version From Error Logs

We can see from the result of the query that the ERRORLOG file is located at the C:\Program Files\Microsoft SQL Server\MSSQL15.MSSQLSERVER\MSSQL\Log path. We will open this path with the Windows Explorer and open the log file with a text editor like Notepad++.

We can see that the MS SQL Server 2019is installed with the version number 15.0.1800.32. Also, information like build architecture, edition, current host operating system are provided.

How To Find MS SQL Server Version From Command Line

We can also use the command line like Ms-DOS or PowerShell in order to list currently installed MS SQL Server Database version. First, we will launch the command-line interface and the SQL command line. In this example, we will use the MS-DOS but PowerShell is ok too. From the  Start Menu type cmd and press enter. Alternatively WIN+R and cmd can be used too.

We will see a clean MS-DOS command prompt. We will connect to the local database server command line with the sqlcmd command by providing the hostname or IP address of the server which is localhost in this case. We will provide the hostname of the server with the -s option like below. We can also type remote server hostname or IP address and specify the instance name like poftut/mydatabase. Lastly, we will type the SQL query select @@version  and press enter. In the new line, we will type go  in order to execute given SQL query which will print the detailed MS SQL Server version information to the command-line interface.

While releasing and using the MS SQL Database Server there are some terms used to describe the release and version. Here we will list some of the most common and popular of them.

MS SQL Server has editions in order to provide different features for different user bases. They are generally used in every MS SQL releases and versions.

LEARN MORE  How To Get Ubuntu, Debian, Kali Release Version?