How To Get Linux Network IP Address In Different Ways ? – POFTUT Skip to content 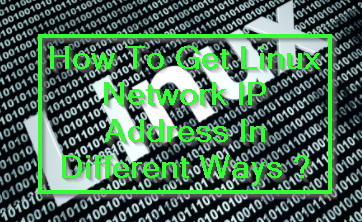 hostname command is mainly used to show or set the system’s host name. But it also provides the IP address of the current system. We will use -I option for this. This will list all interface IP addresses.

ifconfig command is very popular and old command used to manage network related configuration in Linux operating system. We can use ifconfig command easily to get IP address.

This command provides IP addresses line by line. We have also used awk and cut command in order to filter IP address.

ip command is newer network management command provided by most of the Linux distributions. We can use addr option with show subcommand to list IP addresses.

As we can see the netmask information also provided.

We can also list all related information without filtering the ip addr command output.

As examined previously with  ifconfig  command we can also look specific interface IP address with ip address show command like below. We will just specify the network interface name which is ens33 and dev  option in this example.

As most of the networks uses private IP address range we may need our real or public IP address which is used in the internet. There are different web services those provides our IP address in a HTTP request. Here is some of them.