How To Use DockerFile To Build Images For Docker Containers? – POFTUT Skip to content 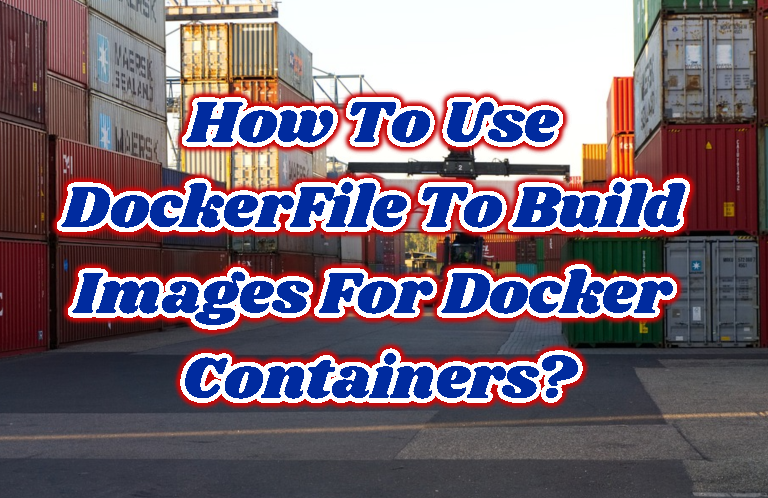 Docker containers run on and made changes to images. Generally, we use existing images which is like a template to create a new container. A lot of Linux distribution and software provide serve Docker images. But in some cases, we may need to create or enhance the existing image. Dockerfile can be used to create new images by providing instructions about the new images.

Dockerfile is a simple text file that contains configuration for the Docker Image which will be created. Dockerfile contains Dockerfile Commands to change the properties of the image. We can also call a Dockerfile as a recipe for an image.

Here is a simple and lean Dockerfile. This file simple derive Base Image from current and latest Ubuntu Docker image and then updates the existing packages. After update is completed apache2 package is install. Generally Dockerfile’s are more complicated then this example as we will see below.

We will start with simple steps where we will build previously given Dockerfile example. This build will create an image with the -t option of docker build command poftut1 .

After the DockerFile is created with the example content we can build our image with docker build command. We will require sudo because the current user does not have enough rights to create Docker image and we get root privileges.

We can see from image given Dockerfile instructions are executed line by line.

Run and Use Docker Image

We can use this Docker image named poftut1 like a regular image for example ubuntu . We will create a new container from poftut1 image with docker run command.

Upto now we have learned simple steps to build an image with Dockerfile . there are a lot of different Dockerfile commands which can be used to run command, create file, create metadata, copy file etc.

Add is very useful command which is used to copy files and folders from local system where docker runs into the image file. This can be used to copy special configuration, copy applications or data.  We can also use URL’s for [SOURCE DIRECTORY] like https://www.poftut.com/data

In this example we will copy the httpd.conf file into the images /etc/httpd/httpd.conf .

In this example we will set build time argument VERSION with the default value 18.10

CMD is another useful command which is used to run commands at the start of the container. CMD will not run during image build. When new container is created this command will be run.

In this example, we want to print Hello Poftut to the terminal when a new container is created from this image. The command will be echo and argument1 will be "Hello Poftut"

ENTRYPOINT is used to set single command which will run on foreground when a container starts. For example if we want to run a web server as container we can set the web server daemon as ENTRYPOINT.

In this example we will start the httpd command when a container start.

ENV command can be used in a Dockerfile in order to set related image environment variables like key value pairs. This can be used like a database or communication channel with the image.

In this example we will set the thread count which will be used by the daemon service as environment variable.

In this example we will redirect port 8080 to the local system port.

FROM – Use Given Base Image

FROM is used to set base image for the created image. This is very important command because it will create base image from an existing image like ubuntu , centos etc. Base image will be searched in the local system and Docker Hub.

In this example we will use CentOS image from Docker Hub.

If we want we can also specify the version of the image like ubuntu18.10 etc.

MAINTAINER is used to set information like author name, email etc. Simply we can set some informational data for the container. This information is like comment in programming languages.

In this example we will set the author email which is poftut@gmail.com

During the build of the image we need to take some actions. These actions can be taken with the RUN command. For example we can install a package with the apt command for a ubuntu image.

LEARN MORE  How To Install Kali Docker Image To The Linux?

In this example we will install apache2 package and then remove cache files.

The USER directive can be used to set UID or username which is to run the image.

In this example we will set the user name as ismail

In this example we will mount local path /home/ismail into container path /myhome which will be created automatically.