How To Use Regex (Regular Expression) with Grep? – POFTUT

How To Use Regex (Regular Expression) with Grep?

grep is very popular tool used to match given search patterns in given text. grep provides simple glob search but also provides regexsupport which is very useful for complex search ant matches. In this tutorial we will examine how to use grep for regex patterns.

By default grep do not supports regex patterns. We can enable regexfor grep with -E option like below. -E option means extended grep with advanced features like regex.

OR we can use alias named egrep which is the same as grep -E like below.

We can match start of the line with the ^ sign by using it in the start of the search pattern. In this example we will list lines which starts with  d .

We can also match end of the line with the $ sign. We will put $ to the end of line and provide the last character we want to match. In this example we will try to match nologin at the end of line.

We can also use to match given pattern without any special usage. We will match the term mail with the grep.

We can match uppercase letters with [AZ] or [[:upper:]] like below.

We can match uppercase letters with [az] or [[:lower:]] like below.

LEARN MORE  How To Exclude with Grep In Linux?

We have match upper and lowercase letters in previous examples but what if we need to match by ignoring case with lowercase or uppercase for given term. We will provide -i option like below. 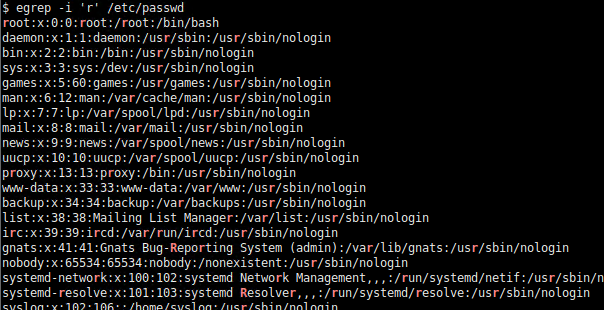 If we want to match any single character we can use . which means just a character. In this example we will match r..t .

We can or multiple patterns with | . In this example we will match root or ismail .

We can match blank line which contains no character even a space by using ^ and $ like below.

We can match lines which contains numbers or digits with [09] or [[:digit:]] like below.