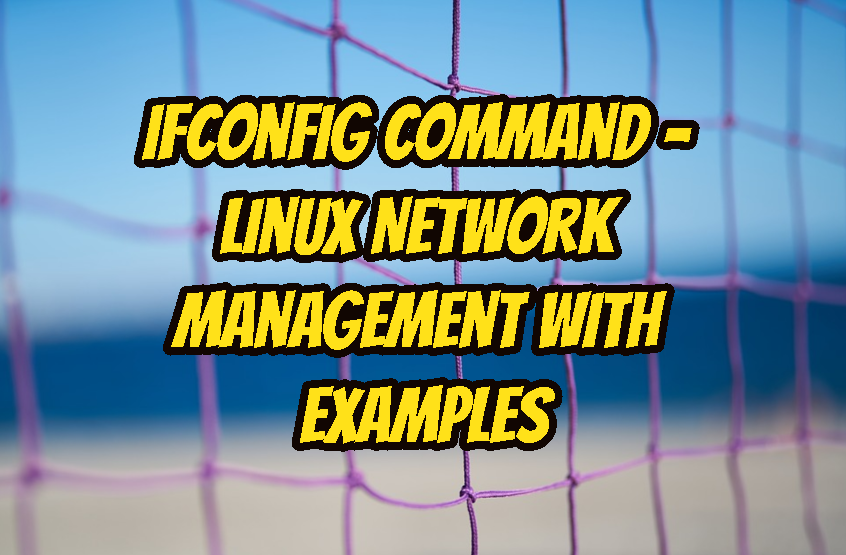 Previously we have listed all network configuration of active network interfaces. If we want to get information about inactive or disabled network interfaces we should provide -a parameter to ifconfig command like below.

Servers generally have more than one interface and some times interface count of Linux system can exceed 10. In these situations looking specific network interface configuration can become a hard job for us. Ifconfig can get specific interface name to list only its configuration.

As we see in the flags line the interface have no keyword like UP which means it is down.

Enabling a disabled network interface is similar to the disabling it. We will just provide up option with the interface name to the ifconfig.

Assigning netmask is similar to the IP address but we will provide the netmask keyword to the ifconfig like below.

Previous there examples we have looked at different operations to set interface configuration. These configurations are generally done in a single shot command like below. If we want to set an IP address, netmask and broadcast address in single ifconfig command we will use the following example syntax.

As we see in the command we provide first interface name and then the IP address. After those, we provide netmask keyword and netmask value and the last one the broadcast keyword and address is provided.

LEARN MORE  What Is My MAC Address Of Network Interface On Windows Or Linux?

MTU is used the term Maximum Transmission Unit. MTU sets the size of IP packets those travels on networks. The default value for MTU is 1500 but this can provide some bottlenecks so the MTU can be changed to 1000 to solve problems. Packets those IP and upper-layer data bigger than 1000 byte will not transmit. Here is how to set MTU with ifconfig.

Operating systems network stacks filter out packets those are designated different IP address than its own. This means that is a packet designated 192.168.122.5 IP address comes to 192.168.122.10 this packet is dropped by default. But there is a configuration to accept these packets. It is called promiscuous mode. When promiscuous mode is enabled all packets are received by the network protocol stack.

Linux operating system has the ability to set multiple IP addresses into a single interface. The only restriction about IP address is that alternative IP addresses must be in the same network. This operation is called as adding a new alias to the network interface.

Removing alias or alternative IP addresses can be done like below.

MAC addresses are assigned by the hardware manufacturer. Generally known as unchangeable but in the network stack, MAC addresses can be changed. Use the following command to change the MAC address.