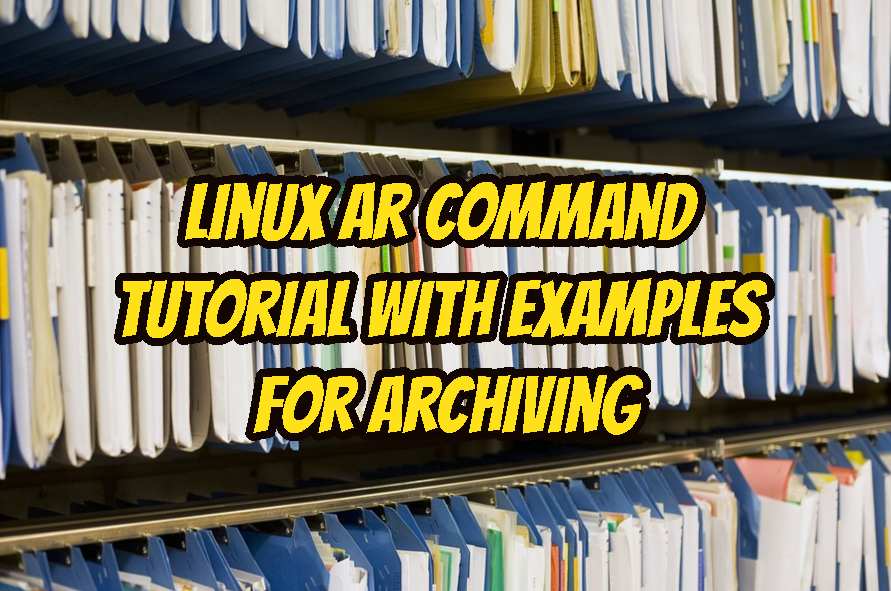 Linux ar command is used to create, modify, and extract archives. ar is the short form and first two letters of the archive. ar is provided by most of the Linux distributions like Ubuntu, Debian, Kali, Mint, CentOS, Fedora, Red Hat, and BSD variants.

Ar Is Archiving Not Compression

Archiving is just putting multiple files into a single file without any extra operation. This means archiving do not compress files put into an archive. Archived files sized do not change and stays the same but in compression, the compressed file sizes are decreased. tar is another compression format and command used to archive files but gz, bz , zip , rar are all of them are compression formats, algorithms, and tools.

ar command is an auxiliary tool for the development and building packages. So it comes with the package named build-essential where we have to install this package to use ar command.

ar command has very simple syntax where we provide the option and then file and directory parameters.

We will start with an archive created with the ar command. r option is used to create an archive and we need to also provide the archive name and the files we want to put into an archive. In this example, we will add files named HelloWorld.java, example.txt, fgets.c into a new archive named myfiles.a.

Archives Can Hold Multiple Files with The Same Name

Extract All Contents Of Archive

We can extract all contents of an archive with the x option. We will also use v option in order to print the file names extracted in verbose mode.

Extract Specified Files From The Archive

We can also extract single or multiple files from the archive. We will again use the x option but we will also provide the file we want to extract. In this example, we will extract the file named example.txt.

AND we can also extract multiple files with a single command by adding the file names at the end of the command. In this example, we will extract files named example.txt , fgets.c we can also add more according to our wish.

By using t option we only list the archives file names but we can also list the attributes of the archived files with an extra v option. This will list time stamp, size, ownership, access rights.

Generally, ASCII files are archived and used software development. So these source code, configuration files are in ASCII form and can be printed to the screen without extracting/de-archiving them. We can use pv option which will print and display all files contents to the screen and prefix contents with its file name.

We can also add new files to the existing archive file. In order to add new files, we will use q option. In this example, we will append a file named example.txt.

Delete/Remove Files From An Archive

We can delete or remove files from an existing archive with the d option. In this example, we will delete the file named example.txt from the archive named myfiles.a.

AND we can also remove and delete multiple files in a single command by adding them to the end of the command and separating it with spaces.