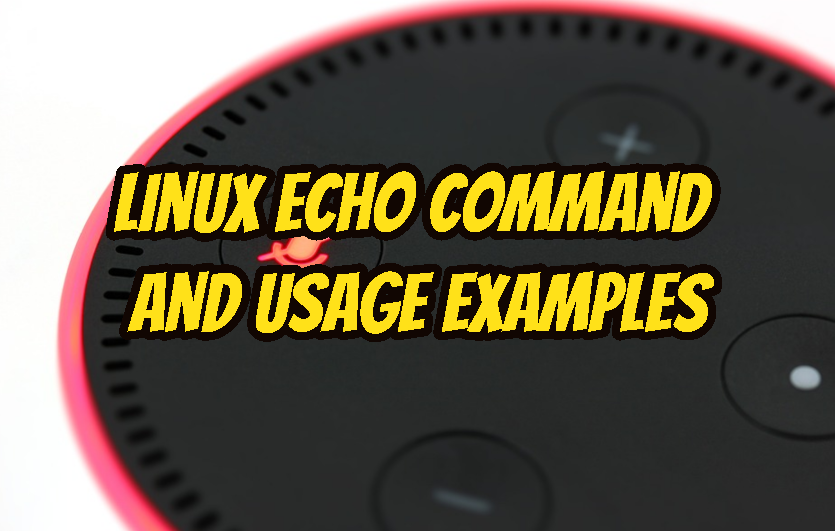 Echo is popular command comes with all of the Linux distributions. Echo is provided by bash and C shells. Echo simple outputs are given values to the console or terminal.

Echo command provides two types of syntax like below.

Simple and most common usage of echo command is just printing specified text to the standard output like below.

Another popular usage form is printing shell variables like below.

Another useful usage is adding \n control character which will print a new line.

Vertical tab will provide new line and align the output text like below.

Backspace control character will delete a single character to the backward with \b in the text.

Normally after printing text to the standard output new line is provided to make things more clear. But this new line can be prevented with option -n

Alert can provided to the shell subsystem with \a . This is very useful to make shell scripts and application more interactive

This option will not affect the output of the text.

Print All Files and Folders

Echo command can work with bash features easily. To easily and simply print all files and folders of the current directory following command can be used.

While printing files and folders specific extensions can be used to filter output. For example, we want to print to the standard output only c source files with the extension .c

Without opening any text editor some text can be written to a file. The file must not preexist. If file is all ready exist all content is deleted and given text is written to the text file.

An empty file can be created by providing an empty string definition and redirecting this to a file.

Add To The File

The last example of the echo command is adding more text to the existing file. Adding operation will no delete existing text in the file.