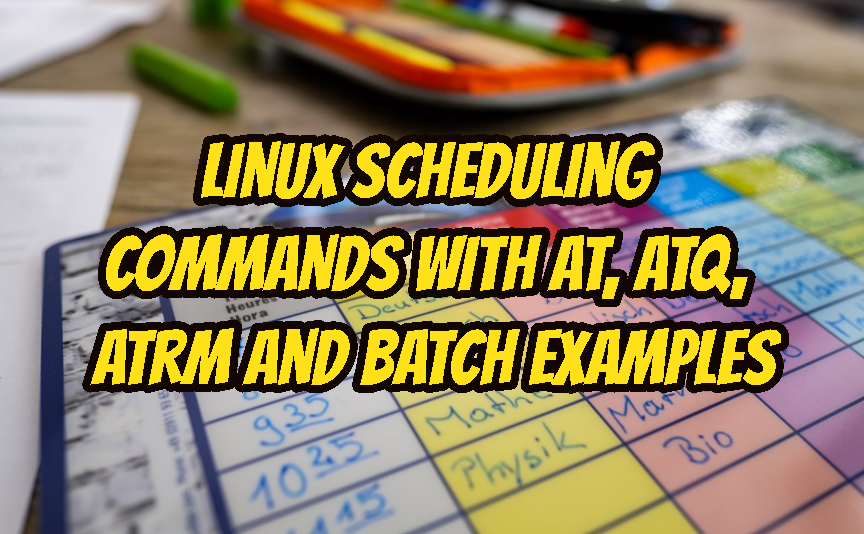 Scheduling commands in IT environments are important. There are tools like at , atq , atrm , batch . We will look all of them in this tutorial.

We will run mkdir test command  at 20:58 . In order to accomplish this we run following steps.

at command supports a lot of different type of time specification. Here some of them.

We can see from screenshot that the command is set to run at 21:31 which is after 15 minutes from now. We can see that this job is numbered 2

View All The Schedules Jobs

In a busy system there may be a lot of scheduled jobs. Listing them can be done with atq command.

We can also remove jobs that not run. We need the job ID which can be listed with atq . We will provide job ID to the atrm command like below. We will remove job ID 2 .

Execute Jobs According to Load Average

We can set for different times for our jobs. But some times just setting time is not enough or not suitable for our situation. There is an alternative way to schedule command We can use batch command to run commands if load average is less than 1.5 . In the example we will run echo "Run reports"

Reload Jobs From A File

Another useful feature is reading commands from a file. As we know commands are read from an interactive shell. We can provide commands to be run at scheduled time. We will use -f option and the command file name to use this feature. In the example we will read commands file named myjobs.txt and run them after 2 days.

By default all users in Linux system can create scheduled jobs. This may create some problems or security issues or simply it is unwanted situation. We can set rules to allow or deny some user from scheduling commands.

LEARN MORE  How To Set Job With Different User In Crontab?

There is two configuration file to configure this.