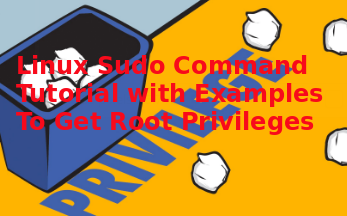 Linux sudo command is used to give root privileges to the normal users . /etc/sudoers file is used for configuration of sudo . Sudoers file provides the users who can run sudo command. Sudoers also used to limit the commands the user can run.

Sudo command will accept given command and look to the sudoers file. If the given user have right to run command with sudo the password will be asked. If the passwordless sudo usage is allowed the command will run with root privileges.

In this example we will run ls / command with user account ismail.

Sudoers file is the database which is used by sudo command. All specified rules are applied during sudo usage. Here is the default Sudoers file.

The general syntax is very simple. We first specify the user name or group name we want to apply rules. and then we provide the commands the user can run. In this configuration file all commands can be run buy given users and groups.

We can add new rules to the sudoers file. First we will open sudoers file with following visudo command.

We will add following line for the user mike which can run all commands.

We can also provide a group sudo rights with the following command. The group name is operator . We add % before the group name.

Every time we issue sudo command we need to provide our user’s password. This may become a nightmare for regular sudo command users. We will add the NOPASSWD to the ALL part of rule.

In this example we configure sudo for user account ismail passwordless.

Sudo command can restrict given user right to use commands. We can use -l option to list allowed commands with sudo. Actually the directories or commands allowed to run will be listed.