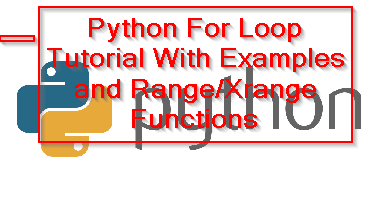 For loop is used to iterate over given sequence. Sequence can be a list, dictionary or similar enumerable object for python programming language. For loop is a bit different from other languages like C, C++, Java … For loop in python mainly uses object to iterate but in other languages counting and statements are used mainly.

Syntax of for loop is like below which consist of for keyword an item, in keyword and iterable object which ends with double point :

After the first line of for loop the loop body starts and which is expressed with indentation.

Now we have simply looked syntax of for loop in previous part. But the best way to learn for loop is running examples. In this part we will run simple but useful example.

In this example we will provide a list which consist of numbers from  to 9 into a for loop and print this numbers to the screen.

Previous part we have used a list which is already created explicitly to iterate. But the problem is how can we cope in a situation where we will iterate from  to 100.000 . Creating a list manually is just a joke. In this situations we can use range function which will create a list for given range. The most readable usage is providing start and end numbers to the range function.

In this example we will print numbers from  to 100 with range function in a for loop.

In previous part we started loop from 0 and incremented in each step one by one upto 100. Increasing one by one is not ideal for some situations. We can specify the increase value into the range function.

In this example we will increase the loop with 2 by providing third argument into range function like below.

Up to now we have used single for loop for iteration. But in real world situations we may need multiple for loops nested together. Matrixes are one of the most used are of nested loops where x and y coordinates are iterated in a nested manner. Nested loop is not different from normal loop we will just provide new for loop in the body block of the another for loop.

Starting a for loop will end after all elements are iterated. This is the most used scenario but there are some exceptions. In some situations we may want to break the loop if a specified condition is met. We can stop and exit from loop by using break keyword.

In this example we will look if the square root of the var and if it is above 20 we will stop and exit from for loop.

We will use previous example but only skip next iteration if the var square root is bigger than 20 .

Another iterable type of python is dictionaries. We can iterate over a dictionary like a list and use both the key and value parts specifying as two items in a for loop.

Python provides decision making mechanisms with if-else keywords. For loops also provides else which can be used to detect break operation. As stated in break section break will finish for loop. If we need to run some code after finishing loop without break we can add else condition.

In this example we will print Loop finished if break is not fired.