What Is 802.11 Wireless LAN (WLAN) Standards? – POFTUT Skip to content 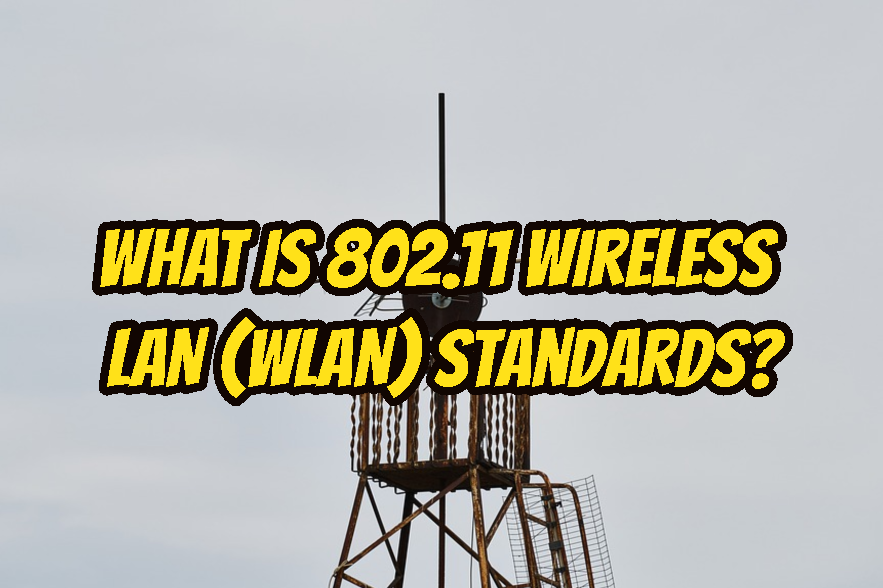 Where comes the 802.1 WLAN term? It is a standard number created by IEEE and assigned for the WiFi network technologies. IEEE 802.1 Wireless Local Area Networks (WLAN) standard is management by the Working group. This working group consisting of experts, academics, vendors which drive the future of the standard.

Wifi or WLAN standards are created very fast in recent years. Especially the usage popularity and needs of the customers make things happen faster. In the first years of the standards, it was slow and there were very few standards but currently, there are a lot of standards. WiFi standards are grouped in generations to name them better. Wifi standard generations are named with numbers like WiFi 1, WiFi 2, etc. In general newer generations will have stable, faster, and lower energy consumption standards with the advance of technology. WiFi family, standard, and working group number of the WiFi or WLAN. All WiFi or WLAN related standards are defined under this number as we will learn them below. 802.11 standards generally use 2.4 and 5.0 GHz with some FHSS and DSSS signaling techniques.

802.11ad is named as WiGig generation because of its bandwidth and frequency bands.

802.11 is the first standard defined under Wi-Fi. This standard provides 1 or 2 Mbps transmission speed in the 2.4 GHz frequency. The transmission is done with FHSS or DSS techniques.

802.11a is an extension to the 802.11 standard with some improvements. This standard provides 54 Mbps transmission speed in the 5 GHz band. 802.11a uses orthogonal frequency division multiplexing for signaling.

802.11 is an enhancement to the 802.11a and 802.11b in order to provide Quality of Service (QoS) functionalities. This standard is mainly designed for multimedia purposes.

802.11g is another popular standard where is provides 55 Mbps transmission speed in the 2.4 GHz band.

802.11n is a revolutionary standard where it adds Multiple Input Multiple Output simply MIMO. This means additional transmitter and receiver antennas can be used which will increase the data transfer rate also the range of the wireless access. Theoretically, the speed will be 250 Mbps but the real speed is about 100Mbps which is very good and 10 times faster than 802.11b.

802.11ac is built on the 802.11n standard to improve speed and antenna count. This standard provides datarate about 433 Mbps per stream where 3 streams can be used with 3 antennas. This will be 1.3 Gbps in total which is very fast like a 1 Gbps Ethernet. 802.11ac uses only a 5GHz band where it provides more channels with less congestion. With a lot of wireless devices with the previous standards using 2.4GHZ is very congested. Also, 802.11ac uses 80 MHz and 160 MHz channels which is very helpful for higher speeds.

802.11ac Wave is an enhancement to the 802.11ac where it supports more antennas where it can achieve 6.93 Gbps speeds theoretically.

802.11ad is an alternative Wi-Fi standard where it operates in the 60 GHz band. This will provide more channels and higher bandwidth for this standard and theoretically it a provide transfer rates up to 7 Gbps. This is suitable for 4K streaming and high definition media.

802.11ad is another alternative to the standard Wi-Fi where it operated under one gigahertz about 900 MHz. Lower frequency usage makes this standard access range nearly twice as standard wireless technologies. This standard is also called Wi-Fi HaLow. It can penetrate different obstacles like walls, houses easily but also provides low transfer rates. These features make 802.11ah very useful for Internet of Things (IoT).

802.11ak is designed for home entertainment systems and industrial equipment that have both 802.11 wireless and 802.3 Ethernet capability. With this standard, these 2 interfaces can operate together as a bridge.

802.11ay is also named as Next Generation 60 GHz and the goal is supporting 20 Gbps within the 60 GHz band. This standard is not approved yet but in the near future, it will be expected to approve.

802.11az standard is called as Next Generation Positioning (NGP). This standard is created to the identification of the absolute or relative positions of the associated or unassociated stations.  By modifying MAc and PHY layers this standard will be created and expected to be approved in March 2021.

802.11ba known as Wake-Up Radio (WUR) and aims to extend the battery life of devices and sensors inside an Internet of Things (IoT) network. This standard is expected to be approved in July 2020.