What is Address Resolution Protocol (ARP) and How It Works? – POFTUT Skip to content 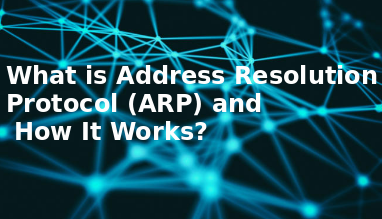 Address Resolution Protocol (ARP) is auxiliary protocol used by Internet Protocol (IP). ARP is defined with RFC826 and gained main stream over computer networks. ARP is used to resolve IP address with MAC or hardware address of the network interface. As we know MAC address is used to identify nodes in a local network.

We will use following command in a Ubuntu linux box to print ARP packets in a verbose manner.

We can see following conversation.

As ARP is a simple protocol there is very little Protocol Resolution Types. We have all ready examined two of them.

We will detailed the RARP in the following parts.

ARP protocol can be used for different purposes. One of them is to defend and own selected IP address. A node can check its previous IP address with a gratious ARP request. This will create an ARP request for its own IP address.

Proxy ARP is used to relay ARP packets to the other segments of the network. Normally ARP will be broadcasted to the current network segment but this may limit ARP request in some network topology where L2 segmentation exist. We can configure gateway or similar devices to relay ARP and act like a Proxy to the other part or segment of the network. Proxy ARP is considered a security issue because of the original node do not answer the ARP request.

In a normal scenario ARP is used to resolve MAC address by using IP address. But in some cases we may need to resolve IP address from MAC address. This can be accomplished by using Reverse ARP a.k.a. RARP. As stated previously there is Request and Response which is the same of the ARP protocol .