What Is Computer Mouse and How It Works? – POFTUT Skip to content 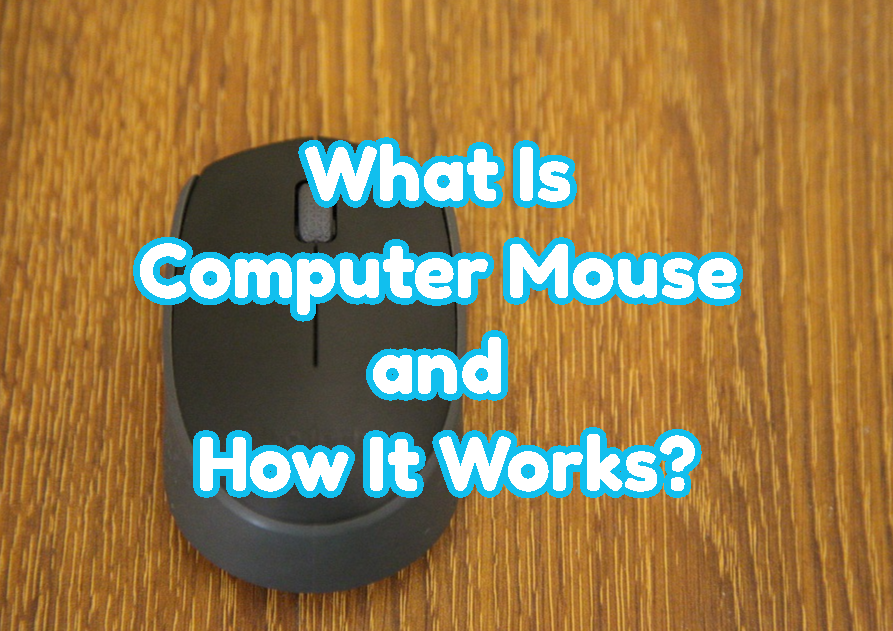 A Computer Mouse is an input device used to control a cursor in a GUI (Graphical User Interface). The computer mouse can be used to select, click, drag and drop, de-select, right-click different types of GUI elements like a window, button, text area, link, etc.

The original or academic name of the computer mouse is Computer-Aided Display Control . But in a publication in July 1965 Bill English has named this device as “mouse”. This device is named the mouse because of its shape, size and resembling tail which is very similar to the animal mouse.

Who Invented The Mouse?

Computer mouse history goes back to 1946 where it is created as a pointing device for the WW2 fire-control radar plotting system. It was a military device and patented in 1947 and kept as a military secret.

The first computer mouse is invented by Douglas Engelbart in 1963. It is named as X-Y Position Indicator for display systems.

The computer mouse which is used directly in computers as a product and component are created in 1982 and used in Apple Lisa computers. Also, Xerox manufactured a mouse in the same year and sold for 415$. With the popular usage of the mouse, Microsoft made MS-DOS Word with a cursor where the mouse can be used.

Even a simple hardware mouse provides some components to function properly and efficiently. Here is a list of components that create the mouse.

Buttons are one of the most important art where user can click these buttons for different operations. The most basic mouse provides two-button today where Left Button is used to select or click where Right Button is used for auxiliary operations like opening a cursor menu etc. Advanced or specially designed mouses provide more than 2 buttons like 4, 6 even more buttons.

Wheel is used to navigate and move the given applications page on the x-axis. Alternatively, the second wheel can be provided to move on the y-axis or different purposes.

Mouse Ball, Laser or LED is used to track mouse moves. Mouse ball is a mechanical solution where a ball under the mouse is located which can move freely. Mouse laser and mouse led is a more modern technology where laser light is used to detect mouse moves.

Circuit Board is the mainboard of the computer mouse and used to digitalize all movement, clicks and wheel actions and send it to the computer.

Cable or Wireless Receiver is another important part where the circuit board will send all the data, movements and actions it collects to the computer system. Cable generally used USB or PS2 interface where Wireless generally uses Bluetooth.

During the long history of mouse different types of mouses are created for different use cases.

Foot mouse is a special and rare mouse type where the mouse is controlled via foot. This is especially useful for disabled peoples.

Intelli Mouse is the generic name which has a wheel. This type of mouse also named as wheel mouse ,scroll mouse .

J mouse is a special mouse type where the keyboards J key is used as a joystick for cursor movement. Generally, IBM computers provide this type of mouse with a special keyboard.

Joystick is a type of mouse because it provides the ability to move cursor and right and left click functions.

Mechanical Mouse was very popular about 20 years ago. The mechanical mouse uses a metal or rubber ball underside and when the mouse body moves it the ball moves in order to detect the movements.

Optical Mouse was first introduced in 1999 by Microsoft. This mouse utilizes LEDs or laser in order to track movements. This was a revolution in the computer mouse because previously all mouse types were based on the mechanical balls.

Touchpad is an integrated mouse type for laptops and portable devices. The touchpad is very different than another type of computer mouse type by working with finger movements. Buttons are the same with a regular mouse. Touchpads do not have any ball or laser lights for tracking movements.

A trackball mouse is similar to the mechanical mouse but with a big difference. The trackball ball is located above the side of the mouse in order to move the ball.

TrackPoint is a point like rubber located center of the keyboard. This is like a very tiny joystick that can be pushed. Trackpoint is mainly used by IBM and Lenovo office laptops.

Bluetooth is the most common connection type which is also called cordless. Bluetooth provides cheap and fast connections where a tiny USB chip is used to connect the computer. The communication occurs between mouse and this chip via Bluetooth.

USB is another popular port where a USB cable is used to connect into the computer USB port. This cable connection becoming slowly less popular.

PS/2 is the connection type before used USB with a cable too. It is absolute for a long time where it was popular in the 1990s.

Can We Use A Computer Without Mouse?

Today users are heavily relied on using the mouse in order to control computers. Computer mouse provides a lot of ease during the usage of the computer especially GUI related tasks like drawing, button, and text-heavy app, menus, etc. We can use a computer without a mouse though even it is very hard to use some applications. Especially some console, terminal, text-based applications can be easily used without a mouse. But on the other side, it is very hard to use CAD or computer-aided design applications without a mouse. But it is possible. Today applications provide most of the function of the cursor via keyboard shortcuts but some of the crucial functions are lacked.