What Is CPU (Central Processor Unit) and How To List Detailed CPU Information? – POFTUT Skip to content 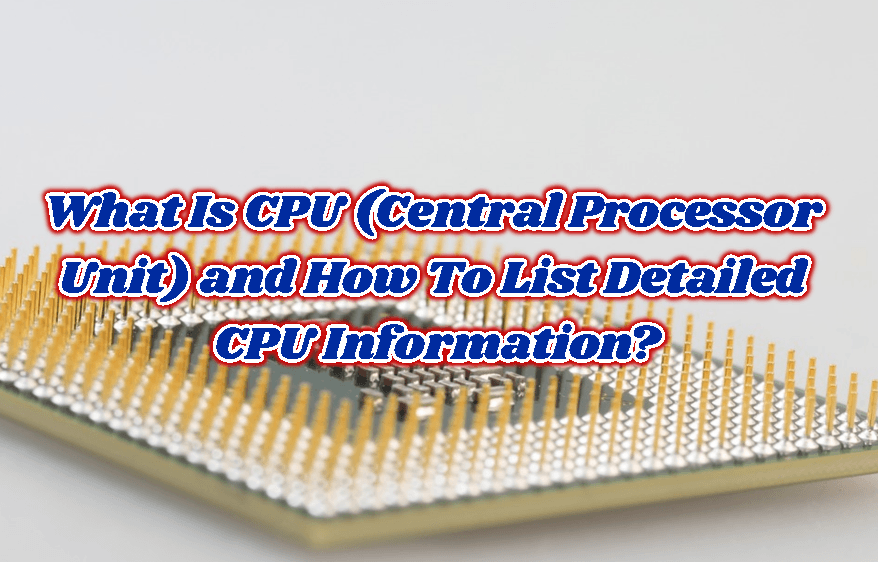 Central Processing Unit or simply CPU is the heart of a computer or server. CPU is used to process most of the data the computer provides. CPU runs operating systems, applications, tools, hardware tools. CPU connected to the motherboard or mainboard via a socket which provides a lot of pins to communicate with other components.

CPU has mainly two components. They are called the Control Unit (CU) which responsible for fetching, processing, setting data, an Arithmetic Logic Unit (ALU). A typical CPU also relies on the following components to function properly.

One of the performance metrics for CPU is Clock Speed. CPU process data multiple times in a second. This frequency is called Clock Speed. Processing more in a single second provides more performance and processing power. The end of the 90’s frequency was about 400 MHz but currently, 4 GHz is the upper value for clock speed.

We have learned that Clock Speed is an important performance factor that is related to the processes data in a second. There are some tricks that can be used to increase the Clock Speed or performance of the CPU. This is called overlock which simply makes Clock Speed higher. This will make also the CPU become warmer. Overclocking will also risk the CPU because of the hot degree which makes the CPU burn with hot.

Old type CPU’s were running single instruction at a given time. The performance improvement is generally done with clock speed simply increasing the clock speed or frequency. But the clock speeds have some limits. In order to get higher performances CPU vendors have created a new technology called cores. CPU Core is an independent processing part where multiple of them can be put in a single CPU. This will make running multiple instructions at a given time with multiple cores in a single CPU.

CPU process data with the ALU. But there is a lot of data to be processed and receiving all of them from RAM is a bit slow in some cases. CPU has Cache Memory which is Level 1 or L1, Level 2 or L2, and Level 3 or L3. These cache memories have very little size like 3MB, 6MB  because of their expensive price. But they are very fast because they are integrated into the CPU.

Random Access Memory or RAM is directly connected to the CPU to provide volatile memory or storage. Reading data from disk and writing to the disk is a very slow operation which will slow down the CPU. RAM provides fast access, read, and write operations. RAM also provides big memory sizes according to the Cache Memory like 4GB, 8GB, etc.

Over the years there are a different type of CPU’s and CPU architectures are created. CPU is very complex according to its working style like how to get data, read instruction, process data, put data etc.

x86 is one of the most popular CPU architecture. x86 is used in PC, Laptop, Server, and Mobile devices. Intel and AMD are the main manufacturers of these types of CPUs. x86 uses 32-bit instructions and data.

x64 bit extensive version of x32. x64 bit uses 64-bit instructions and data. AMD is the creator of the x64 but Intel also uses this architecture too.

ARM is one of the most popular CPU architecture after x86 and x64. ARM is mainly used in Mobile Phones, TVs, Embedded systems.

Get CPU Information with CPUID Program

We can use the CPUID tool in order to get detailed information about our CPU. We can download CPUID for Windows operating system from the following link.

We can continue with a classical Windows installation procedure Next->Next.