What Is exFAT FileSystem? Compare exFAT with FAT32 and NTFS – POFTUT Skip to content 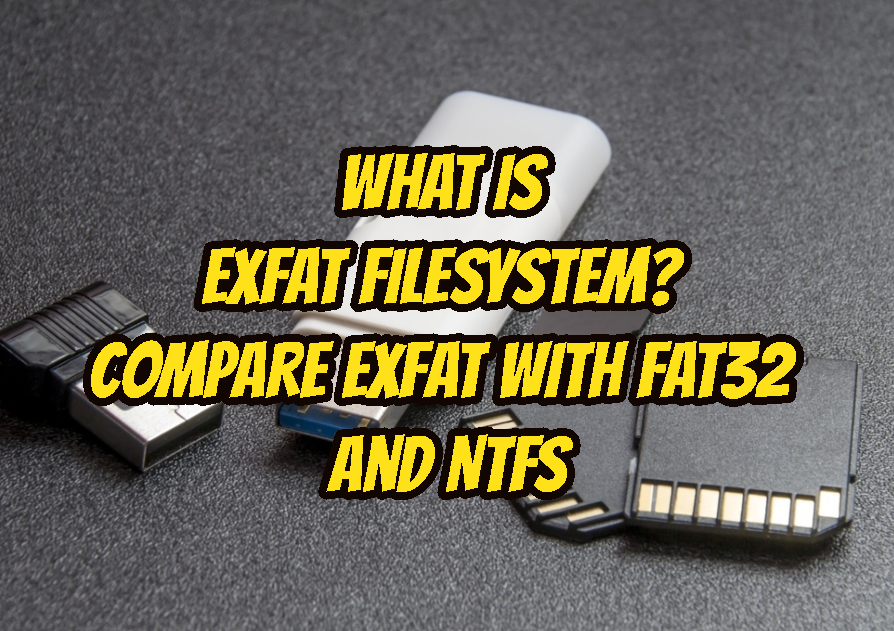 exFAT or Extensible File Allocation Table is a file system introduced in 2006 by Microsoft. exFAT is mainly designed and optimized for flash memory, USB flash drives, and SD cards. exFAT can be used alternative to NTFS and FAT file systems to lift performance and size limits. Actually, exFAT32 is an advanced version of the FAT16 and FAT32 file systems and provides fewer features than NTFS. Simply exFAT sits between FAT16/FAT32 and NTFS filesystems.

exFAT is created in late 2006 as a feature of the Windows CE 6.0 mobile and embedded operating system. Then other operating systems and platforms like Windows XP, Windows Vista, Windows 7/8/10, Windows Server 2008, Linux, MacOS X 10.6.5 supported this file system.

exFAT provides different features and limits than other Microsoft based file systems like NTFS and FAT.

exFAT provides a lot of advantages for different use cases. Below you can find major advantages of the exFAT file system.

Even exFAT provides a lot of advantages there are some disadvantages actually which is not positive for the exFAT file system.

LEARN MORE  How To Unmount Disk in Linux, Ubuntu, CentOS with umount Command

Linux provides the exfat-fuse and exfat-utils packages to work with exFAT file systems. These utilities can be installed for Ubuntu with the following command.

exFAT is supported and used with the following devices and platforms:

We can create an exFAT filesystem easily after plugging the USB Flash drive we will right-click on it and click to Format . Following menu will be listed where we will select exFAT as “File system”. The last step is pressing the “Start” button.

Linux supports exFAT. In order to use exFAT with Linux the exfat-fuse and exfat-utils packages should be installed. We can then create an exFAT filesystem for Linux with the “mkfs.exfat” command like below.

exFAT Performance vs FAT32 and NTFS

Is ExFAT The Same As Fat32?

The name of the exFAT and Fat32 is similar where both of them contains the word FAT . You may ask if is the exFAT the same as FAT32. exFAT and FAT32 are not the same but the exFAT is an update to the FAT32 file system with modern features. We may call that FAT32 +NTFS = exFAT in general.