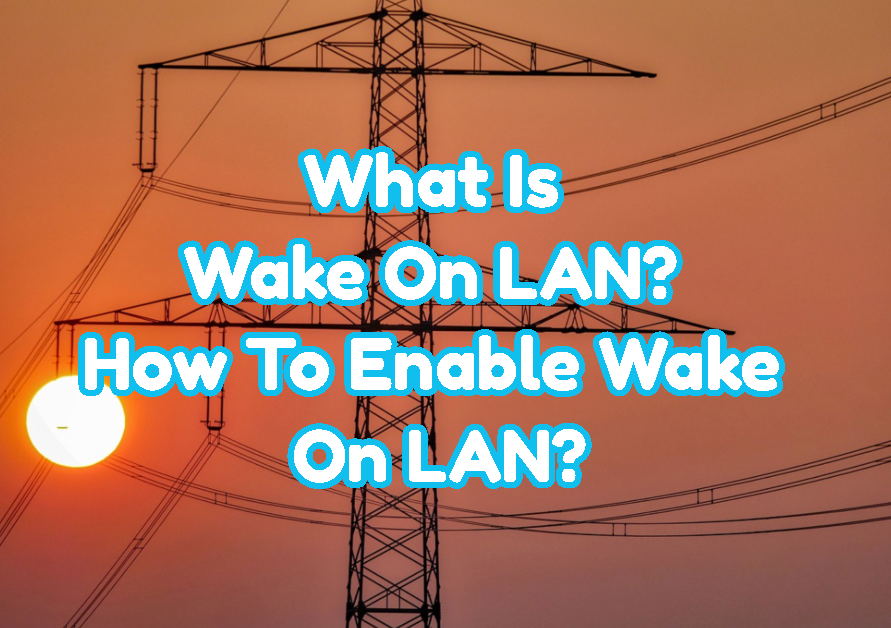 What Is Wake On LAN?

Wake On Lan (WOL) is ea feature provided the network interface card and motherboard in order to boot a system over a network connection by sending special package which is called as Magic Packet. The magic packets contains the remote system NIC MAC address where the remote system NIC is only listening to the network in low-power mode even the system is powered down. When the NIC receives the magical packet the NIC will signal the computer power supply or motherboard to wake-up or boot the system like pressing the power button.

Magic Packet will trigger the start of a system remotely. Magical packet is a broadcast frame which works on OSI Layer 2 where it contains the remote system MAC address and FF or 255 values for data.The first 6 bytes contains “FF FF FF FF FF FF” value and then the MAC address of the target system by repeating 16 times.

In order to trigger the Wake On LAN features the following requirements should be met by a Magical Packet.

As a simple and useful protocol there are a lot of software which can trigger Wake On LAN. Below you can sing some of them. Also Wake On LAN can be easily implemented with some programming and scripting languages with the help of low level library support.

Configure Wake On LAN On BIOS

BIOS is the basic operating system for the computer or system hardware. The Wake On LAN features can be configured from the BIOS menu. In order to enter the BIOS menu use keys like “Delete”, “Escape”, “F2”, “F10” etc. in the power-on phase of the computer which will open the BIOS Setup Utility like below. Wae On LAN generally located in the “Power” options menu with names like “Wake Up on LAN”, “WOL”, “Power On By PCI” etc. The “Wake Up on LAN” features should be enabled like below.

On computers like HP, and ASUS the BIOS menu or tool can be a bit different like below.

But there are different type of BIOS software where the Wake On LAN configuration can be set from different menus or pages. So for more preciese and detailed information please take a look to the manuals.

Configure Wake On LAN On Windows

In order to run Wake On LAN feature properly also the operating system should be configured via the Network interface card configuration like below. We will use the “Start Menu” in order to open “Device Manager” where we will access to the “Network Adapters”section. From the “Network Adapters” section we will right-click the NIC we want to configure which and select “Properties”.

The NIC properties window will be listed like below. There we will select the “Advanced” tab which provides detailed configuration about the NIC firmware. On the down the “Wake on Magic Packet” feature will be selected and the value will be set to the “Enabled”.

Configure Wake On LAN On Linux

Or for RPM based distributions:

Current configuration about the Wake On LAN can be listed with the following command. In this example the network interface card is named as “eth0” but it can be also “eht1”, “ens1” etc.

We can enable the Wake On LAN feature with the -s and wol options like below.

Configure Wake On LAN On MacOSX

Wake On LAN From Windows

Windows operating system has a lot of alternative tools for the “Wake On LAN” tool. One of them which is very simple is “Wake On LAN – Magic Packet”. This tool requires the remote system MAC address and optional information like Internet Address, Subnet Mask, Send Options, and Remote Port Number. By clicking the “Wake Me Up” button the magic packet will be sent to the remote system.

Alternatively following software can be used as a Wake On LAN tool or client.

Wake On LAN From Linux

Linux operating system and distributions provides different tools to trigger Wake On LAN feature. One of the most popular one if “ethernetwake” tool which can be installed for Ubuntu, Debian, Mint and Kali like below.

Following commands can be used for remote wake up with the “ether-wake” or “wakeonlan” command.

Alternative tools for Wake On LAN from Linux are like below.

Wake On LAN From MacOSX

MacOS.X provides different tools as a Wake On LAN client. “WakeOnLAN” is the most popular one which provides GUI and some extra features. Similar to the Linux “wakeonlan” can be also used for MacOSX too. This tool can list information about LAN computers and current status and network information. Also scheduled wake up calls can be set up easily with GUI.

Wake On LAN From Android

Android provides the tools named “Wake On LAN by Mike Webb” and “Wol0n – Wake on LAN” tools which can be used to boot a computer from an Android smartphone easily. They provide features like Grouping, Network Search, SecureOn, CSV Import/Export etc.

Wake On LAN From iPhone/iOS/iPad

iPhone and iOS platforms provides the “RemoteBoot WOL” tool in order to turn on remote system. As an alternative the “Wake Me Up – Wake-on-LAN” tool can be used too.

Wake On LAN From Python Script

Python provides low level libraries which can be used for Wake On LAN magic packet creation. “wakeonlan” package can be installed with the following command which provides the “send_magic_packet”.

and then magic packets can be sent with the send_magic_packet() function by providing the remote system MAC address or IP address like below.